The ‘regtech’ boom: how the financial crash spawned a new industry in the City

November 26, 2018
In life, the saying goes, there are two certainties: death and taxation. In the financial sector, you can add a third – regulation.
The 2008 financial crash brought about a major regulatory overhaul of the financial system in the UK, overseen by the Bank of England and the Financial Conduct Authority (FCA). Last year, the FCA issued fines for compliance breaches totaling nearly £230m.
Compliance, clearly, is not optional. But the legal obligation of adhering to the rules is costly and, just as organizations turned to technology to digitize their businesses, they are now using it to cope with the deluge of regulations they must negotiate daily. The new industry, a spin-off from fintech, is known as “regtech” – and Britain is a global leader. 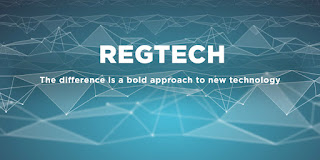 “The crash unleashed a tsunami of legislation and increased scrutiny on businesses in areas such as Know Your Customer, financial terrorism and money laundering,” says Richard Anderson, product management director at Thomson Reuters. “There was a lot of panic about how businesses were going to keep pace with regulation, and their answer was to throw money and bodies at it, which is expensive and slow. However, in the past few years, we’ve seen organizations attempting to find more cost-efficient solutions, and technology like AI is now capable of automating a lot of the work.”

A raft of companies have sprung up to enable businesses to improve or streamline regulatory compliance – in areas such as new legislation, risk management, tax management, identity management, blockchain, trade monitoring, compliance and reporting – employing a raft of solutions such as automated learning, AI, data analytics, cloud-based SaaS and blockchain.
Last year, global regtech investment surpassed $1bn. In the first quarter of this year, it surpassed $500m. There are currently approximately 250 regtech businesses globally, of which about a quarter are based in the City of London. Last year, 26 UK-based businesses featured in the regtech 100 lists of innovative companies that every financial institution should be aware of in 2018.
“Regtech has applications for government, environmental firms, and healthcare, but the financial sector is very established here and there’s a clear correlation [between] the growth of fintech and regtech in the UK,” says Anderson, “It has trickled down with people from inside the industry addressing changing needs in the City. The FCA has actively encouraged a very fertile environment here, too.”
Advertisement
One of those people working inside the system who identified a need for regtech was Charles Delingpole, CEO of ComplyAdvantage, which offers automated screening solutions to help businesses in banking, gaming, insurance, cryptocurrency and payments to combat terrorist financing and criminality.
“I started in the fintech side and saw how new companies were struggling to combat what is evil, essentially,” he says, “I thought it would be extremely useful if I could build something that detects this sort of behavior. So I looked at the available technology and saw that automation and AI now enable us to look at all the data, rather than some of the data and that it often reaches different conclusions.”
ComplyAdvantage launched in 2014 and now has a staff of 115, with offices in London, New York, and Singapore. It serves 400 clients globally and two years ago raised $8.2m in investment, a quarter of which came from venture capital fund Balderton Capital.
“The regtech sector is attractive because it is growing quickly,” says Balderton Capital partner Rob Moffat. “Clients are now receptive to using third-party solutions, and regulatory deadlines are accelerating sales. The challenge for regtechs is how to build meaningful competitive differentiation with technology or network effects. ComplyAdvantage demonstrated these characteristics, which is why we chose to invest in them.”
Recordsure was one of the original London regtech firms. It was founded in 2012 by Joanne Smith, now CEO, who recognized issues of compliance from her own time at the Financial Services Authority. The business offers a capture solution to record, store and analyze audio conversations, using AI to build a fully auditable trail of customer interactions.
“What we offer is unique,” says Smith. “Vulnerable customers are a huge issue for banks. Rather than listen to just 1% of calls, what Recordsure can do, which is transformational, is efficiently review 100% of the conversations and pick out any anomalous patterns. We have saved clients in financial institutions and government departments millions of pounds by automating monitoring mechanisms that used to take weeks into minutes.”
Smith believes regtech companies like hers provide a less trumpeted but equally important benefit to the industry: trust-building.
“Customer expectation is growing in reaction to what has gone on in the past. People are going to expect far more transparency in their financial dealings with companies. There will come a point where people will expect to have a copy of the conversation they’ve had, and we can do that.”
The pace of change and the bewildering amount of regulation globally is only going to increase. There are 90 regulators worldwide issuing more and more rules, presenting businesses with new challenges on a regular basis.
“The regulatory landscape is changing all the time,” says Anderson. “In the US it’s slowing down, here we’ve just had GDPR, then there’s a lot of complexity on a geopolitical level, and around the corner with Brexit. If you look at a major bank that’s trading in the UK and the EU, there’s a presumed layer of complexity that we might need to adhere to dual or parallel regulation.”
This all ensures the demand for the kind of solutions regtechs offer is not going to diminish. In short, this isn’t the last you’ve heard of the regtech boom.
Digital Transformation Finance Innovation Regtech Regulations Technology