5 benefits of RegTech in transforming compliance into growth opportunities

December 27, 2019
In this article, we will explain all the benefits of RegTech. Digital transformation, among other things, has opened financial sector companies up to opportunities for growth and expansion that were unthinkable until a few years ago.

Along with these opportunities come significant challenges that not all financial institutions, especially traditional ones, are equipped to address. Our reference here is clearly to the development of the Fintech sector, bringing new, aggressive, and tech-savvy players into the market.

This is not surprising when one considers that Fintech is attracting significant investment.
According to a study by Hampleton Partners, investments in Fintech companies and startups by venture capital groups more than doubled in 2017 at $15 billion, while in 2018 they reached a record of $31 billion. This growth, among other things, is also being reconfirmed in 2019, where the flow of investments is consistent and stable, also thanks to the strengthening of market areas such as InsurTech and RegTech.

As we mentioned, digital transformation has also provided new tools and unexpected benefits for all companies that know how to grasp them; RegTech is one of these.

A small sector, high growth
RegTech is part of the broader Fintech sector. Regulatory Technology allows companies to easily adapt to the increasing pressures of regulatory reporting while being cost-effective and secure. 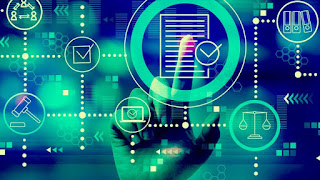 It is also the technology that, thanks to digital transformation, allows companies to automate certain data monitoring processes and to verify that legally established requirements have been fulfilled. In essence, RegTech is the “result” obtained by combining digital transformation with compliance.

While this market segment has existed for several years now, it is only recently that we have seen such significant growth, indicating the segment’s increasing importance in the Fintech context.

Evolution is not always a simplification

One of the main reasons for this growth is that, despite the innovations linked to digital transformation, national and international regulatory pressures are increasing. In fact, digitization has created new situations, contexts, and subjects that need to be regulated.

The financial sector in Europe provides a good example of the types of regulations and obligations that each company must observe and satisfy to operate in full compliance with the law.

The reference is to MiFID II, the European directive on financial transparency, which requires all of those who provide financial services to ensure a greater level of transparency for customers. This directive, which also greatly increases the protections for customers, also brings significant cost in terms of compliance for all companies in the sector.

First of all, this is because MiFID II requires greater compliance on the part of financial companies, for example by increasing reporting activities and informational obligations toward customers.

But that’s not all.

Above all, the cost lies in the fact that all processes must be reviewed to adapt them to the new legal requirements. Also, companies will need to constantly monitor for changes and developments in the legislation. This applies to both current and future rules and regulations. For an idea of the number of rules and, therefore, work that companies must face, consider that, for the financial sector alone, around 50,000 new regulations have been implemented in just three years, between 2009 and 2012.

This number has even doubled over the following three years.
The pace and volume of changes make it nearly impossible for a company to rely only on its internal resources or traditional methods to stay compliant.
As a result, companies have begun to invest in RegTech.

Less spending. Better spending.
The remarkable benefit of RegTech is also linked to another factor: savings.
Whether it’s time, energy, or money, a company’s resources are often limited. RegTech solutions can ensure greater efficiency, both in operations and costs. Among other things, this efficiency is essential for an organization, as a report by PWC pointed out, identifying five areas where the benefits of RegTech solutions are evident.

The first concerns the optimization of data, that, thanks to RegTech can be managed organically by the company, providing a more comprehensive overview of activities.

The second benefit is the optimization of internal production processes, such as the use of automated solutions to standardize procedures, making them clearer, more defined, and ensuring they are error-free.  Also, the implementation of RegTech solutions integrated with automation technologies such as Artificial Intelligence or robotics leads, according to KPMG Singapore, to savings of up to 75% for carrying out internal processes for companies in the financial sector.

The third benefit of RegTech solutions is the reduction of operational risks. Here, the implementation of RegTech helps in reducing the number of mechanical and repetitive operations for staff, who are more likely to commit errors.

Also, the fast-paced, changing regulatory environment that most companies face means that organizations may not be up on the latest changes, and this greatly increases the possibility of incurring violations related to human error.

The fourth benefit also has to do with human resources and their employment. Thanks to the automated solutions mentioned above, RegTech ensures the possibility of optimizing production capacity, allowing human resources to be used more efficiently (and perhaps for tasks with greater added value) and on custom infrastructure when necessary.

This benefit is all the more evident when RegTech solutions can exploit cloud technology, which makes these solutions more adaptable than pre-existing digital infrastructures and also completely changes the company’s approach to its own data, thanks to the greater elasticity and flexibility that the cloud offers.

Finally, the fifth benefit that RegTech solutions offer to companies is that it saves time.
With RegTech, the time needed to search for and retrieve relevant data or the time needed to carry out compliance checks is reduced. Also, it improves time to market, i.e. the period needed to respond to regulatory changes and the corresponding change in processes that will need to take place.

Benefits of RegTech: from burden to opportunity
This shortlist of benefits of RegTech makes it clear why it has become not only a growing segment of Fintech but an increasingly strategic investment area for companies in any industry.

Thanks to the various innovative solutions provided by digital transformation, Regtech has in fact converted regulatory compliance from a mere bureaucratic and procedural task to an unexpected opportunity to make the business more efficient, modern, and productive. Among other things, the implementation of RegTech solutions by companies also has a positive effect on national systems.

Proof of this is the fact that several countries are pushing RegTech solutions, considering it a strategic condition for addressing key issues in the financial industry and for improving the attractiveness of companies in the market.

One example is Japan, which in the run-up to the Tokyo Olympic Games is encouraging the implementation of RegTech technologies to create an environment as conducive as possible to the adoption of Fintech services.

This shift to RegTech also represents a significant opportunity for Japan itself to overcome issues in its own financial market, which is held back by several systemic obstacles, such as an extremely high number of cash transactions and the lack of digitization in the public and private sectors.

What future for RegTech?
For these reasons, it is easy to imagine that the RegTech sector will continue to expand, carving out a leading role within Fintech and becoming increasingly important for all types of companies.

But what kind of growth is it facing?
According to a KPMG report, by 2022, total corporate spending in the RegTech industry is expected to reach $76 billion, seven times higher than the figure than investments in 2017.
This means that by 2022, expenditure on RegTech solutions will account for 34% of total corporate regulatory expenditure. These increased investments will profoundly change the RegTech industry and lead the financial players involved to change their approach to this market.

We will see companies moving from a more “functional” use, where RegTech solutions are designed to ensure compliance and to improve supervision of employee tasks, to a sort of RegTech 3.0, where these technologies will be used to help companies better manage and make use of their data. Having a better overview will ideally help companies avoid risks and predict problems that may be caused, but also solved, by tech innovations as a result of digital transformation.

It is clear that the path is only just beginning and there is still a long way to go.
Benefits of RegTech are real, however, one fact remains: as always, the companies that best adapt to these new technologies and who can intercept these changes before the competition will be able to radically transform their compliance, making it an opportunity for the business and a lever for staying competitive.
Digital Transformation International Regtech Regulations Technology